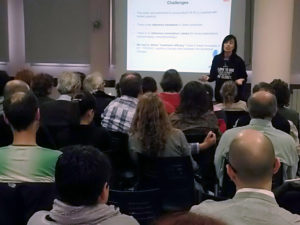 Prestigious scientific journal The Lancet Neurology publishes in its next edition the so called “Green Tea study”, conducted by a team of researchers from Barcelona’s Centre for Genomic Regulation (CRG) and Hospital del Mar Medical Research Institute (IMIM), led by Dr. Mara Dierssen and Rafael de la Torre. Part of the article can be already checked online.

This study has shown that a compound in green tea, epigallocatechin gallate (EGCG), along with a protocol of cognitive stimulation, can improve the intellectual abilities of people with Down syndrome.

This work summarizes the results of the clinical trial done by the IMIM between 2012 and 2014, in which 84 people with Down Syndrome between 16 and 34 did participate. The results of this study conclude that individuals treated improved their visual recognition memory, as well as attention, self-control and adaptive behavior, and that these changes were related to biological changes in brain connections.

Previously, during the pre-clinical study, it was found in mice that the combination of epigallocatechin gallate and cognitive stimulation was able to inhibit the effects of a gene included on chromosome 21, the one that people with Down syndrome have tripled. By inhibiting this gene (DYRK1A), related to brain plasticity and some intellectual abilities, they managed to improve the functioning and development of the brain.

Dr. Dierssen and Dr. De la Torre plan to continue the investigation and to initiate a clinical trial with children with Down syndrome. “Our results have been positive in the adult population where brain plasticity is limited because the brain is already fully developed. We believe that if the treatment is applied to children the results will be even better”, say the researchers. However, to carry out this new phase of the study they must find new ways of financing, as existing at present do not cover the budget.

In the following video you can see (in Spanish) an explanation of the study of green tea by Dr. Mara Dierssen. This is a summary of the talk-colloquium organized with Mara Dierssen by Down Catalunya in 2015 on the occasion of World Down Syndrome Day.