A group of researchers from three universities (University of Barcelona, ​​Pompeu Fabra University and University of Valladolid) is developing a video game in order to improve communication skills of people with Down syndrome, and by extension, facilitate social integration.

The game, called “La Piedra Mágica” (The Magic Stone), aims to be a self-learning tool, which can also involve the accompaniment of an educator. The way to pass level will be by overcoming voice tests, which can be adapted to each participant. 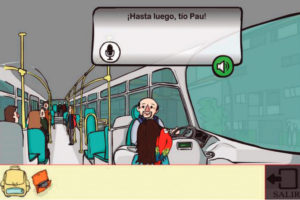 This initiative is the result of an investigation led by the RecerCaixa program (held by Obra Social “la Caixa”), in collaboration with the Catalan Association of Public Universities (ACUP). In order to improve it, researchers continue to study aspects such as rhythm, speed, fluidity, stress, intonation and modulation of the voice of people with Down syndrome.

Down Catalunya collaborates in this phase, and next May 13th several youngsters with Down syndrome will record their voices at the UPF. Later, they will collaborate in the testing phase of the improved version with the new data.

There was previously a pilot, in which took place youngsters from Aura Foundation and students of special education centers El Niu (Barcelona) ​​and El Pino de Obregon (Valladolid). The main conclusion of this pilot was that 60{3ebe092b8d29e3ca5af6948e3eac6d598287e4fd6c715459d2f0a7cc5d9e16da} of participants gained naturalness and fluency in expressing themselves.

Specialists from various fields have been working on this project: linguists, psycholinguistics, computer engineers, educators and philosophers. A few months ago Revista Síndrome de Down magazine published an article signed by many of them where the project was explained in detail.